One of the slimmest linear on the market, measuring only 3/8 inch width, NIXE FLEX is a superior field-curvable linear that bears exactly the same light features and performances as its straight counterpart.

Available in 3* different increments : 2″, 3″ and 8″, thus offering a range of minimum radius curve respectively from 6″ to 24″ in order to fit perfectly into its environment such as curved wall, rounded bar counter, wide column, vaulted ceiling, dome…

Carefully worked down to the smallest detail, this masterpiece comes with magnetic mountings as thin as matches so as to subtlety integrate perfectly and seamlessly, without any apparent trim or edge. Field-curvable, it advantageously embraces the curve of the surface against it is placed. Manually adjustable, it offers uninterrupted and unrivalled light distribution in every corners.

This stunning luminaire is a technical prowess for its smallness and exceptional luminance performance. We have specially designed its linear optics to create pixel-free distribution, thus giving constant and evenly luminance on the workplane. Despite its smallness NIXE FLEX still controls its light distribution and offers five different light beams, from very narrow to very wide, as well as an asymmetrical distribution. 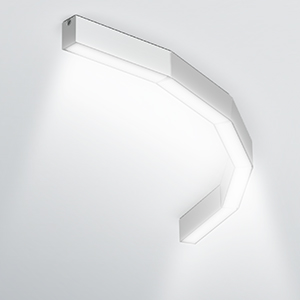 Cool touch. Can be handled safely and repositioned during operation.